Two years ago was the last Special Event that Apple held in October. This year there is also one: There’s more in the making is the name of the Keynote which is on October 30th.

This time Apple was a little bit creative with the invites and designed custom Apple logos. The colorful and artful logos clearly show the focus and which products we can expect.

In 2014 the Mac mini got it’s last update but still can be purchased at Apple. The gossip factory is working overtime for an expected update. The There’s more in the making event would be the perfect place for Apple to update the Mac mini. Alongside the Mac mini update we can also expect a hardware update for the MacBook.

The custom Apple logos should call attention to the creativity. This creativity can be used to create masterpieces with the Apple Pencil on the iPad. Many are of the opinion that these logos were drawn on the iPad with an Apple Pencil. On September 9th 2015 Apple announced the Apple Pencil together with the iPad Pro. Maybe there are not so many things that can be upgraded on a product like this but there is a little chance that we get a new version by the end of this month.

Many are waiting to get their hands on the optional Wireless Charging Case for the AirPods. With this case you can charge your AirPods fast and easy over wireless charging. The AirPods inside the case already get charged with a similar technology but the case itself have to be charged with a lightning cable. Last year Apple announced this optional case with a release date in 2018. This month event would also be a perfect place to finally reveal the final product. The case will be available with the AirPods together or optional if you already have AirPods.

There is also a chance that we get a new version of the AirPods. Apple announced the current generation back in September 2016 which is already a long time ago. They could add more gestures to change the volume, update the W1 chip oder give us an improved battery life.

iPad with FaceID and bigger Display

Apple revealed FaceID ad a new security feature along with the iPhone X last year. At the beginning of this year there were also rumors that we get a new iPad with FaceID. Apple only unveiled a new cheeper iPad with the focus on education.

But now it is almost certainly that we get a new iPad with FaceID on the There’s more in the making keynote. Furthermore we are looking for a bigger screen which takes up almost the entire front like on the iPhone X/Xs. We are looking forward for this iPad!

How do you see this? Should Apple switch from the Lightning connector to USB-C? Tell us in the comments below! You can also follow us on Facebook oder Twitter. 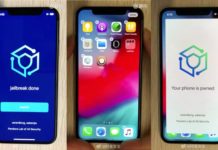